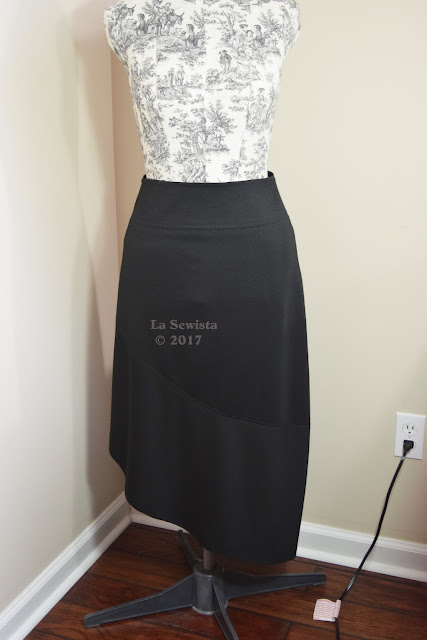 I am not crazy about this skirt. I started out liking it but now that it's done it just varies too much from what I saw and expected. 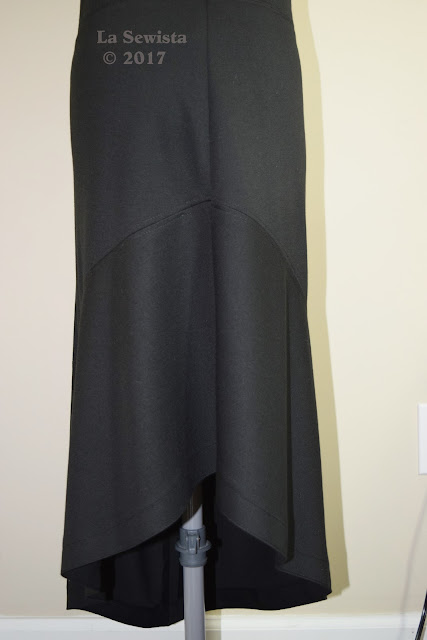 I also think some of the issues were the pattern itself. Here's the down and dirty.

This is Vogue 1515, a Sandra Betzina Today's Fit pattern. Today's fit was just fine but there were other issues. I started out with thinking it was all my fault but now really think it's the pattern.  The description is "below waist skirts have wide yoke, piping, cargo pocket, hidden pocket on front yoke facing, and shaped hem." Choosing not to emphasize my already wide hips I did not do the cargo pocket. The interior facing pocket was just too much futz and I was just not in the mood for piping. I wanted a simple skirt with an interesting cut. The pattern photo is a busy print so really hard to see drape and volume. Check out this line drawing:

I really expected a lot more fabric in the bottom layer of the skirt. It looked like the classic circle cut to me and this shape was why I bought the pattern. Alas, you can see that there really is not that much shape and the bottom tier is really just more fabric added to make it more A line. I also thought where the bottom tier met the middle tier the fabric would sort of "stick out", Marcy Tilton style. It didn't. It really just had a rather ugly little puff at the intersection. It looked bad, IMO, so I stitched again to make a smoother transition.

Then there was the pattern layout. Look at this skirt well. 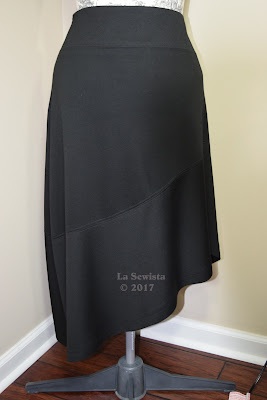 No, that's not two different fabrics. I SWEAR each piece was marked on the wrong side with masking tape. Each piece was laid out with a nap layout, nothing turned, that is nothing unless it was indicated. 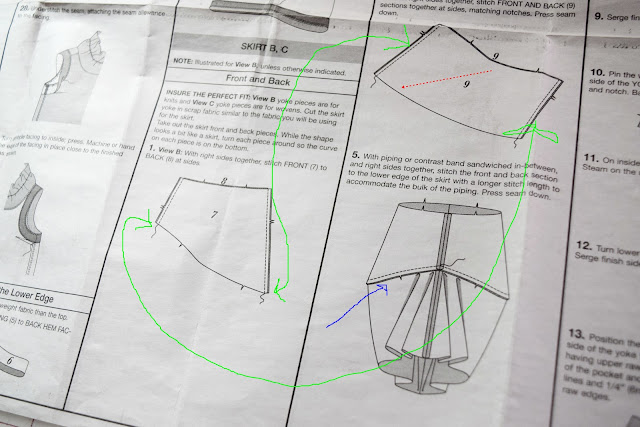 But I think the issue can be possibly found above. The red serrated line on piece #9 indicates the straight of grain and that is how these pieces were laid out.  The green lines show which sides connect to which. You can see that this is really pretty much a sort of odd A-line. The purple arrow/line shows how other than the higher side seam this pretty much is a flat piece, therefore no volume like the tech drawing. Given all that, is my piece off grain enough to look like a different fabric? At the least it is contributing. Moving around the fabric at this point shows it matches but I think having it cut and turned this way makes it appear "off" As is true to all sewing dilemmas, this was discovered near the end of construction, when hems were interfaced, topstitched,etc. Boo hoo.

The fabric is a black rayon/poly/lycra ponte, mostly rayon but I'm not sure of the ratio at this point other than it is mostly rayon.It's nice looking up close and drapes nicely. It is not super heavy. It didn't call for it but I fused the yoke and the  facing with fusible tricot to help stabilize it. That definitely worked.

There are two different "skirts" described in the pattern. One has a zipper, one is pull on so each has it's own yoke. I used an invisible zipper and it came out pretty decent. It had been a while. I really think they are easier than the lapped versions.

I changed the sequence a bit. The pattern has you attach the yoke at the end. I put the yoke on first with the top tier of fabric. It was then very easy to put the zip in with the facing. I used this tutorial from Tessuti as a reminder on how to do a faced invisible zip. At first sight it looks like a Rubik's Cube, but it really is quite easy. 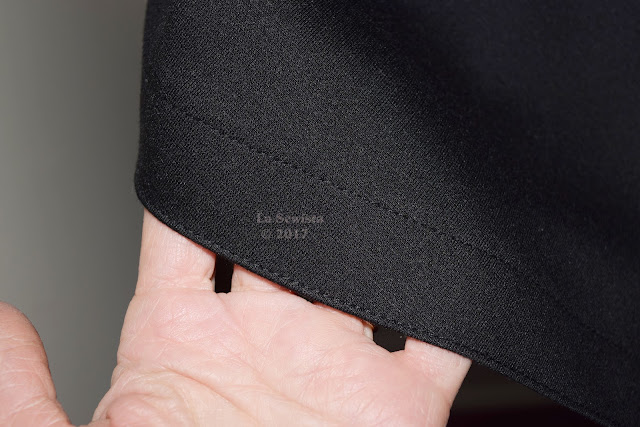 This is the hem I prefer on all the knits I sew now. It is backed with tricot fusible interfacing. It is first stitched on the fold of the hem and then an inch and a  quarter away. The edge stitching really helps the hem drape nicely. Give it a try.

I think, given my work and the folks I hang with, I can wear this skirt with a tunic or long sweater. Hopefully, like most sewists, I will be the only one who sees the shading difference. In the meantime I am just movin' on! 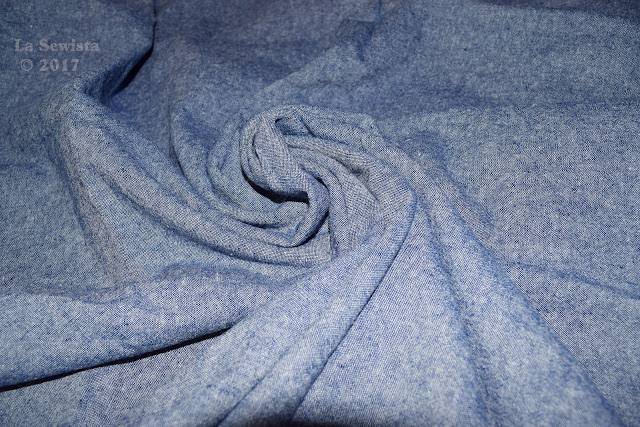 My next project will be with one of my very favorite fabrics. I used it often. It is Kauffman Essex linen blend, a linen cotton yarn dye. This one is the denim blue. I haven't solidified on a pattern yet, but soon! 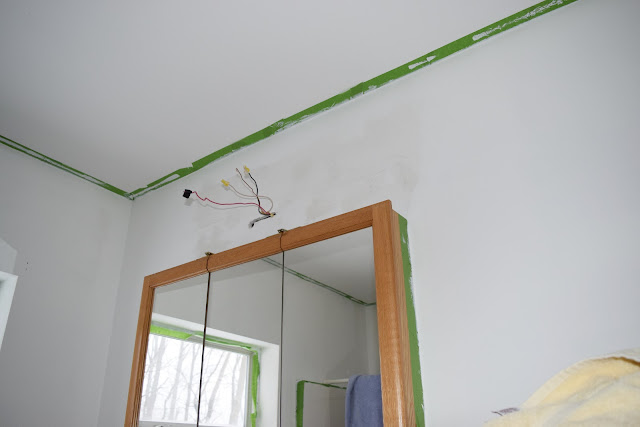 This has been our focus lately so the sewing has to fight for my time. This is primed and ready for wall paint. Plumbers are called for the changeout. Walls will be painted, shelves put up, and cabinets painted as well. Bye Bye "golden oak" that I have detested since day one. ..............Bunny

Who owned this pattern?

Recently I've had the opportunity to charge ahead on a long anticipated project, searching down some great thrift shops. This has not be... 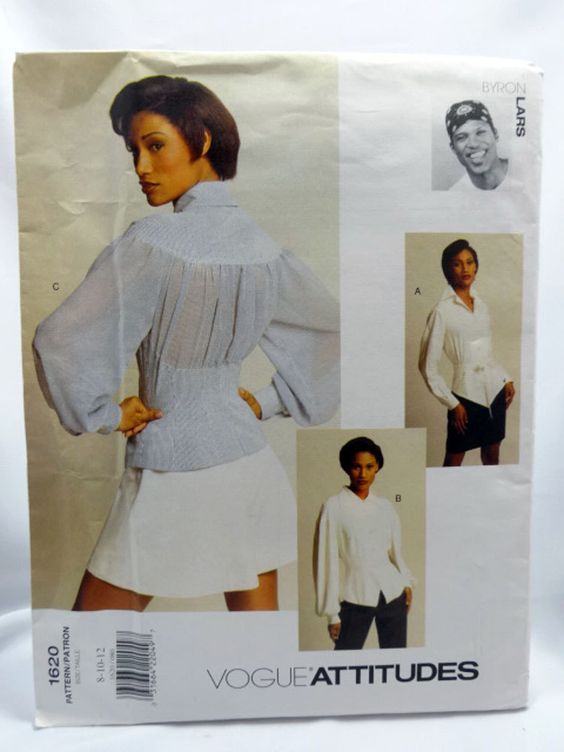 Bunny
Passionate sewist, tryer of anything fiber related, accumulator of too much sewing "stuff", sharer of sewing knowledge whenever I can, appreciator of all who have taught me so much, member of a family I love madly and who love me back, friend of so many amazing sewists who sew at all levels. Proud Blogger since 2007!